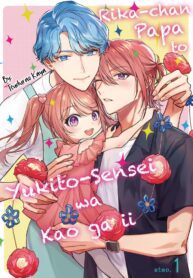 [From BL Tsundoku Scans]: “Can’t I fall for you if I’m serious and not just playing around?”
In an effort to raise the daughter of his late sister, Rika, Satoshi abandons his past ways of being a playboy and, with the help of those around him, tries to become a good father.
However, with the relatives who had been helping him moving away, he gets help from a kindergarten teacher named Yukito. Yukito, who is calm and gentle with the face of an idol, is beloved by Rika and the other kindergarten children.
One day, when Satoshi is about to see off Yukito who came to his house to help out, he is suddenly pressed up against the wall and asked “Don’t you remember when I hit on you, Satoshi-san?”
A romantic comedy about a younger, handsome kindergarten teacher and former playboy dad raising a kid.

A Link Between Relationships

The Double Life of the Demon King