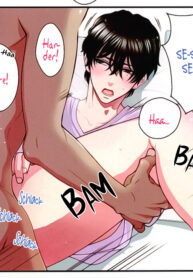 Since high school, Kento Amano has been madly in love with his senpai, Ryousuke Momo, a person who does not want romantic ties with anyone and refuses to have serious ralationships, that’s why he only wants sex. Kento is convinced that Ryousuke acts this way to fullfill the lack of love, so he decides to do everything possible to make him happy, but Ryousuke continues to reject his attempts again and again ’til eventually they stop seeing each other. Years later, starving and homeless, Amano meet again his te beloved senpai by chance, who, seeing him so bad, offers him his house and a job. Amano is very excited about the idea of living with Ryousuke but he clearly warns him: As of today you are no longer my kouhai, you will be my servant! On the other hand, Amano will begin to realize all the obstacles he will face on the way, not to mention the msn who pass by Ryousuke’s bed… Can he bear it?