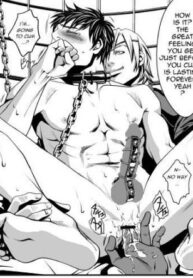 Collection of oneshots, originally self-published and/or released in Pink Gold anthologies, except chapter 7 which is new for this release.

1. Purism
A Doctor Dias, seduces his live-in roommate Crow, whom he met when Crow saved him from a wolf attack.

2. Pet Keiyaku
A young man offers to sell himself at auction in order to obtain the money for his brother’s medical care, but before he goes on the block, he needs some training…

Cat in a Cardboard Box